Who Are the Striders?

The Hingham Striders Fitness Room in the Recreation Center finally is a reality.

As more and more residents visit the facility for the first time, they inevitably ask, "Who are the Hingham Striders?" Well, the "Striders" go back about 25 years to a lively band of friends who met at Hingham High School every morning at 5:30 a.m. and ran down Union Street into Wompatuck Park. 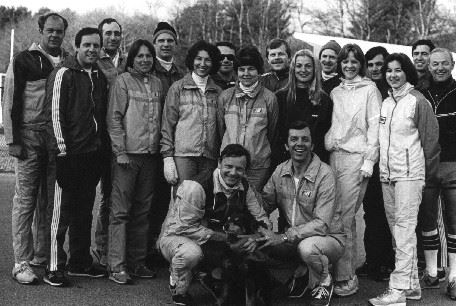 Twenty-five years ago there were not too many "joggers" in town. There were no fancy running suits, no streamlined baby joggers, no Lycra pants - not on any Striders that's for sure! But every morning they met, shared ideas, told a few jokes and "solved the world's problems." One year when the Hingham High School Marching Band needed new uniforms, they volunteered to run a road race in Wompatuck State Park to raise the needed funds. So they named themselves the "Hingham Striders," made up some t-shirts and organized a race through the park. It was such a success that they were asked to take over the 4th of July Race which had maybe fifty participants at the time. The "Striders" kept running together as they prepared for Boston Marathon every year. There was no real club, no meetings, no dues, just friends helping friends and that is how it all began.

The Race
The Hingham Striders took over the race when running was beginning its boom and over the years those "Striders" turned a small town race into a first class event. The Hingham Striders 4th of July Road Race is now a classic, running down Main Street and finishing under the giant American flag at Loring Hall. The numbers grow every year and the t-shirts have become collectors items that have been spotted at races all over the country. It is a slice of Americana that kicks off a day of celebration in Hingham. Runners do the race, enjoy a Pancake Breakfast, watch the old-fashioned parade and then finish it off with a band concert and fireworks display at the harbor. Spectators line the entire route and they participate by cheering and providing plenty of water. It is a race which attracts world-class runners, parents with children, week-end joggers, senior citizens and last minute daredevils.

The Hingham Striders turned this little race into a first-class event, established a scholarship at Hingham High School, and then, with little fan-fare, turned it over to the Recreation Commission. But every race day they are there. No one needs to be called. "Striders" show up every 4th of July to make sure the race runs smoothly and now they work side-by-side with the Recreation Commission counselors lending their expertise and their humor and making sure all goes well.

Bringing Community Together
The "Striders" are Hingham at its best and they consist of doctors, lawyers, teachers, and businessmen. Although many people may not know them by name, the "Striders" continue to contribute to the town in many ways. Church groups, civic organizations, Booster Clubs, coaches, and town committees have benefited from their expertise. Twenty-five years later, you may not see many of them running down Union Street but they still make their presence felt throughout our community. By donating the funds generated over the years to outfit "The Hingham Striders Fitness Room" they leave a wonderful legacy. The Hingham Recreation Commission applauds them. Thank you Hingham Striders!
The Hingham Striders


To the Hingham Striders, and all their children who helped over the years, the sponsors and friends who are too many to mention, that helped make the 4th of July Road Race a success, we salute you!